Posted on October 16, 2020 by Leslie Green Leave a comment

When COVID-19 struck the United States early this year, the world as we knew it changed. Countries began tallying up their dead, borders closed, cities and businesses shut down, and more than 120,000 schools swiftly ceased in-person learning for more than 72 million K-12 and college students.

The lockdowns ended time with precious friends and family, travel, graduation ceremonies, proms, birthday parties and entertainment outings. They resulted in millions of job losses and a collectively high level of stress that hadn’t been seen in decades.

In particular, the pandemic’s subsequent effects—uncertainty, isolation, unrest and disappearance of opportunities—are putting young people at risk for higher rates of depression, anxiety and suicide.

“How do we expect youth to process it all?” asked Kamilah Davis-Wilson, community outreach and education manager for The Corner Health Center in Ypsilanti, Mich., which provides health and mental health services to 12- to 25-year-olds and their children.

Adenike Griffin, behavioral health manager at the center, said society isn’t equipped for the after-effects of COVID and likely won’t be even after vaccines and treatment are developed.

“I don’t think we’re prepared for people’s inability to cope,” Griffin said. “There will likely be higher rates of depression, anxiety, PTSD (post-traumatic stress disorder) and more profound mental illnesses, like psychosis. The effects are going to be huge. We’re going to need to pull together as many resources as we can to create a new normal.” 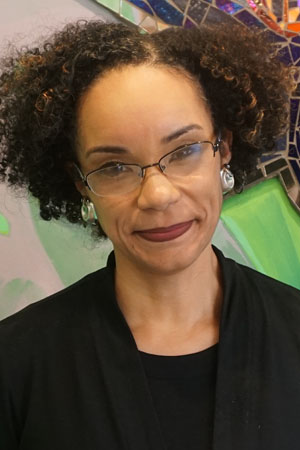 The Ford Motor Company Fund, the auto company’s philanthropic arm, is responding by increasing its support of mental health awareness and treatment. Among its initiatives, the nonprofit is partnering with the Corner Health Center on a series of virtual discussions for 12- to 19-year-olds. Topics include social isolation; anxiety, depression and social unrest, suicidality; and grief and the holidays.

“We know mental illnesses in youth have been on the rise over the past several years, and the pandemic has given us even more reason to bring resources to this space,” said Lisa Gonzalez, a manager at the Ford Motor Company Fund. “Our team continues to look at new ways we can partner with specialists and bring forth resources free of charge to teens in this new virtual world. It is important to give our youth the tools necessary to improve their mental health in a safe setting which can hopefully translate to an open dialog between family and friends.”

In this story, we explore how COVID-19 is affecting young people in this country and provide information to help parents and guardians alleviate their distress.

Even before the pandemic, the number of young people ages 10-24 who were suffering from serious mental stress, including depression and anxiety, was rapidly growing. These high rates of depression and anxiety caused suicides to climb 56% from 2007 to 2017, making it the second-leading cause of death in that age group.3 Other findings:

To gauge the effects COVID-19 was having, the U.S. Centers for Disease Control and Prevention conducted a survey from March through June and found that 1 in 4 adults ages 18-24 said they had seriously considered suicide in the past 30 days.

When schools first shut down in March, many administrators said it would be for two to four weeks. That’s because no one knew how long the pandemic would last. Six months in, however, and there’s still a big question mark over the direction it’s going and how it will affect our future.

That question mark is adding to the latest mental health crisis, said David Rosenberg, MD, a practicing child and adolescent psychiatrist and professor and chair of the Department of Psychiatry and Behavioral Neurosciences at Wayne State University.

“Do we wear a mask? What’s going to happen with flu season? Will we be shut down again? Will the vaccine be effective? The uncertainty around these kinds of prolonged, pronounced societal pressures fuels depression and anxiety, especially in the most vulnerable—our teenagers,” Rosenberg said.

“And the more depression and anxiety there is, the more uncertainty we feel.”

COVID-19 has also taken a toll on the financial security of young adults. About 31% of 18- to 23-year-olds surveyed reported that the virus has had an extremely negative financial impact on their lives, and 26% said they had to move back home.4

“This is one of the first generations that doesn’t feel as if they will accomplish as much or earn as much as their parents because of how the job market is right now,” Rosenberg said. “So, there’s almost the sense of ‘What’s the point?’ ”

Amanda Beck, a home-based therapist at the Inkster, Mich.-based nonprofit Starfish Family Services, said the teens she works with are usually excited about getting new clothes for school.

This year was different.

“They didn’t know if they were even going to be able to go school or if their recently unemployed parents could afford to buy clothes,” Beck said.

Before the pandemic, a 12-year-old that Davis-Wilson worked with was preparing for track season, a 17-year-old was looking forward to driver’s education, and a college student was getting ready for his first internship. Then COVID-19 canceled their plans.

“Choirs, dance recitals, SATs, overnight retreats, proms—they all went away,” said Angela Burgess, a Starfish therapist. “Kids say: ‘I did what everybody told me to do. I worked hard, and now I can’t have those things.’ ”

As a result, young people are grieving and unmotivated. 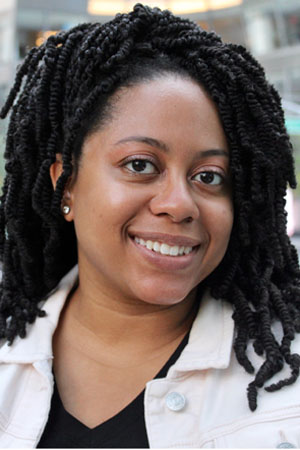 “Graduating from high school signifies the end of childhood, while going to college or getting a job signifies the beginning of adulthood,” Beck said. “If we’re not going to celebrate these things now, then when? Nobody knows. That’s stressful.”

Living in the great unknown is also leaving some teens unmotivated to learn and adding anxieties to those who already struggle with school.

“School is already one of the biggest pressures for me, especially if I don’t have enough time to complete my work or get enough explanation,” said Sofia, 14.

Teachers are doing better this school year, Sofia said. But she misses her friends and doesn’t know when they will return to the classroom.

“The best thing about school is the social aspect,” she said. “But there is no school in Miami because it’s still the epicenter [of the pandemic].”

Nineteen-year-old Kayla Williams was a college freshman still adjusting to living in a dorm, going to her classes at Wayne State University in Detroit and trying to pin down her undergrad major when the pandemic struck. Suddenly, the public health major had to move back home and adjust to learning remotely.

In September, Williams returned to campus for her job. But because most students haven’t moved back, she said it doesn’t feel like the same school. She knows the number of young people getting COVID-19 has increased and worries about catching the virus.

“As an employee, they enforce a lot of extra rules, like hand-washing every half-hour,” Williams said. “But the virus is still really anxiety-producing. It makes every task stressful because there’s so much uncertainty with this disease and what’s going to happen.”

Experts say isolation before the pandemic increased the susceptibility to illness, depression, anxiety and substance use disorder. Pandemic-related quarantines and shutdowns will have a bigger global mental health impact.

School doesn’t just provide teens and young adults a basic education, said Griffin of The Corner Health Center. It also keeps them connected to the teachers, coaches, peers, communities and safe spaces that have, for a long time, played important roles in their lives.

Without that connection, said Beck of Starfish Family Services, teens often feel as if no one wants them, loves them or cares for them.

Psychologists say distance learning can make it more difficult for youths who have suffered—or continue to suffer—emotional, physical or sexual abuse at home and also for those living in food-insecure households.

“There’s no escape at home,” Beck said. “School was somewhere they could go.”

At the same time, working parents are overwhelming many lonely, bored adolescents with adult responsibilities.

“They’re having them step up and help with siblings by babysitting and checking homework,” said Burgess, the Starfish therapist. “They’re also expecting teens to use self-discipline to manage their time and get their work done. But teens don’t have those skills yet.”

Sofia knows suicide is avoidable. After a classmate shared graphic details of trying to kill himself, she sought out a counselor, who got him help. Still, Sofia worries about the classmates, teachers and administrators who don’t always take mental health issues seriously. 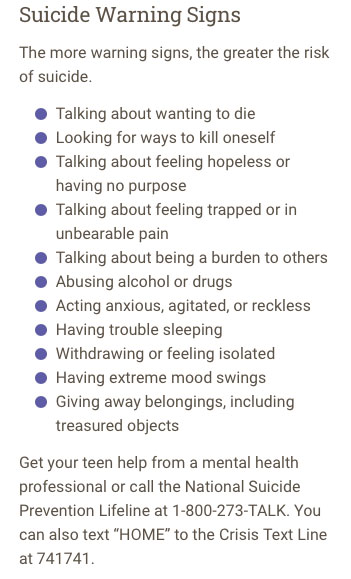 “Kids would say: ‘Why would you try to help them? They are just doing it for attention,’ ” she said. “But if they are self-harming, they need help and attention. Not giving them help is the worst thing.”

While the increasing rates of depression, anxiety and suicide are troubling, mental health experts say there is hope—and also help.

Recognize the signs: Young children with anxiety or depression may have more tantrums or become clingier. Older children may exhibit changes in appetite, mood, energy levels or activity.

“Listen to what they are saying and how they are feeling,” said Davis-Wilson of The Corner Health Center. “They have a lot of feelings about everything happening. Ask why they feel this way. Remember, they are children and try to work with them in a way that works for them.”

If you or someone you care about is exhibiting suicidal behavior, seek help immediately from a mental health professional, or call the National Suicide Prevention Lifeline at (800) 273-8255.

“When a teen is having thoughts of suicide, we can’t discount it,” Beck said. “We have got to take them seriously. Connecting them to appropriate treatment can be lifesaving.”