Posted on January 9, 2019 by Leslie Green Leave a comment

More than 40 million people are struggling with hunger in the United States. Nearly half of those people are employed.

Food insecurity doesn’t just affect unemployed individuals and those living in low-income communities. That’s a common misconception. It’s an issue for working families — and for the business community overall.

“Even in the wealthiest communities, you still have families struggling to make ends meet,” said Gerry Brisson, director of Gleaners Community Food Bank. “Forty-seven percent of the people who get help from a food bank or food rescue are employed. You’ll find kids getting free and reduced lunch, breakfast, an after-school snack or dinner in every single public or charter school.”

Forgotten Harvest Director Kirk Mayes agreed. “If there are any life transitions going on behind closed doors, even if you live in an affluent community, the first place that instability rears its head is at kitchen tables.”

Among the physical toll hunger takes, there is an extraordinary annual $460 billion economic cost associated with food insecurity resulting from difficulty learning, reduced lifetime earnings, lost productivity and health-care expenses, according to economists The Perryman Group.

Nevertheless, the Environmental Protection Agency reports we don’t eat more than 40 percent of the food produced in the U.S., and we discard more than 37 million tons of food annually.

These staggering statistics encouraged The Kroger Co. to establish Zero Hunger Zero Waste, a program designed to eliminate waste companywide and help eliminate hunger in the 35 states in which it operates by 2025. The plan includes:

“The reality is we operate businesses in Michigan, and people are hungry in Michigan. Oakland, Wayne and Macomb are three counties that are among the top most food insecure in the country,” said Rachel Hurst, corporate affairs manager at Kroger.

In October, Kroger partnered with Crain Content Studio, the marketing storytelling arm of Crain’s Detroit Business, to gather experts from government, nonprofits and retail to talk about solving the problems of hunger and food waste. 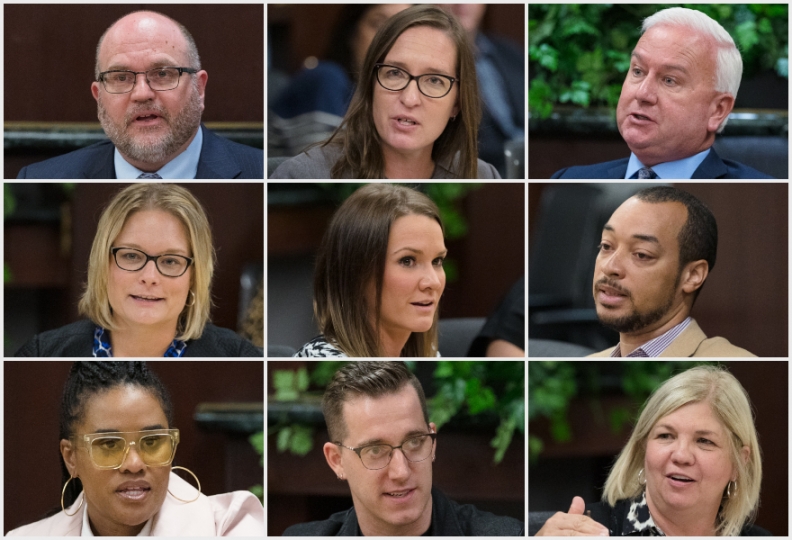 James Rigato, executive chef and owner of Mabel Gray Kitchen and co-owner of Doug’s Delight, both in Hazel Park, regularly witnesses uneaten food. While restaurants try to waste as little food as possible, he said you can’t control what people order.

“We’re a very consumer-driven society,” Rigato said. “Plenty of people over-order because they want to taste everything.”

Detroit Dirt works with companies — such as General Motors Co., Blue Cross Blue Shield of Michigan, restaurants and nonprofits — to divert food waste from landfills and create compost for farmers.

“We pick the food waste up. We process it with the Detroit Zoological Society’s herbivore manure, and we make compost,” Murray said. “Hopefully, we’ll see investment for the technology that is needed in order to mass-produce that product. Think of all the jobs that can be created.”

From the perspective of a restaurateur, Rigato said investment in composting infrastructure makes sense.

“If somebody came along and said, James, you have to compost. Here’s your bin. Do not throw that away, or you’ll be fined. I would say ‘Okay, great.’ I pay for dumpster service. So, what’s the difference? That absolutely makes sense.”

Like Kroger, Busch’s Inc. is working to reduce food waste and make it a resource for those in need. The Ann Arbor-based retailer donates to schools, food pantries and food banks. In 2017, Busch’s donated 100,000 gallons of milk and 12,000 cases of food from its 17 locations.

Still, even grocery stores find themselves with edible foods, such as doughnuts and meats, that aren’t eligible for donation.

“We can’t donate anything that has been put out, unfortunately. So, there’s always going to be ‘X’ amount of waste,” said Busch’s Owner Doug Busch. “That’s what makes composting a great option. It could still get recycled into the system.”

Hurst and Busch said it would help if there were alignment between nonprofits as to what is donatable and what is not. Lori Yelton, a nutritionist with the Michigan Dept. of Agriculture and Rural Development, added it’s often about keeping food as safe as you can so if it isn’t used, it can be donated.

That program, being tested in Madison and Warren Consolidated schools, involves maximizing the use of federal programs, increasing the quality of the food served, feeding food insecure children 365 days a year, making sure the students are eating the food, and then adding programs after school and in the summer so the children can be fed.

The MDE isn’t working alone on feeding hungry children. It is partnering with Gleaners and the Food Bank Council of Michigan and hopes to add more partners.

While getting more fresh fruits and vegetables into school cafeterias is crucial, the purchase of food and receipt of donated food is highly regulated by federal and state governments, explained Melanie Brummeler, acting supervisor at MDE’s Office of Health and Nutrition Services.

These regulations can make purchasing difficult. But Yelton said they improve food quality. She said the state’s Cultivate Michigan — farm-to-school and farm-to-institution — program, started by the Michigan State University Center for Regional Food System, makes it possible for schools to purchase local foods or to find places to donate food.

Michigan also participates in the U.S. Dept. of Agriculture’s and Food and Nutrition Service’s Fresh Fruit and Vegetable Program that allows school districts with higher food insecurity to purchase fresh fruits and vegetables as a daytime snack for students.

Waste, however, is not regulated

“Some school districts compost,” Brummeler said. “I’ve heard anecdotal stories where they just have buckets of food, and it goes home to the kitchen manager’s farm to feed to her pigs.”

Holland suggested school districts create a shared table where if a child doesn’t want a school-provided meal, he or she can share it with other students.

School lunches are one thing. Forgotten Harvest’s Mayes, however, expressed frustration with programs designed to feed children in the summer.

“We’re asking … to allow summer lunches to be released so the kids can go home and eat them if they want. But the actual spirit of the conversation that we don’t hear … is our legislators don’t want to allow that care and service to extend to the parents. They just want to keep the soft hearts for the kids, but if this is involving letting a parent get half a sandwich that the kid is not going to eat, then no.”

Consequently, he said, those leftovers end up in the garbage rather than nourishing a hungry parent. Gleaners’ Brisson concurred, adding. “We don’t believe, based on our experience, that you can have a food-secure child in a food-insecure household.”

Making a commitment to food security

Brisson said the consequences of not addressing hunger are enormous, and the cost is significantly bigger than the cost of food. “If employers made a commitment to the food security of their own teams, how would that affect people at work? Who feels better at work hungry? Nobody. It will always be the case,” Brisson said.

“We have food available in our break room every day at every location; because we know if you come to work hungry, you’re harder to work with,” he said. “This isn’t rocket science. We really need to look at the systems in place and evaluate how we can turn those systems into winners. It’s not just the people who need help that win when this problem is solved. Businesses win. Health care wins. Education wins.”

This story was originally published by Crain Content Studio for The Kroger Co. Learn more about the Zero Hunger Zero Waste Campaign at TheKrogerCo.com.

Learn more about composting by contacting the Department of Environmental Quality or your county’s Michigan State University Extension.