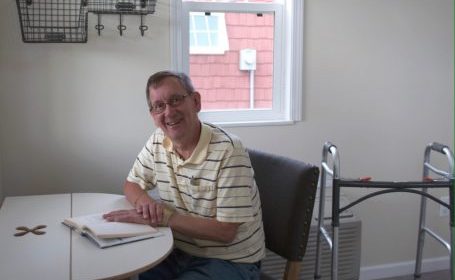 David Leenhouts loved preaching in the pulpit. But after 25 years, frequent health challenges required him to take substantial time off, and then he was forced into early retirement. Worse still, when Leenhouts lost his job, he lost his home because the United Methodist Church in east Ohio provided his housing.

“It’s been a long year,” says Leenhouts, a thoughtful man with a warm smile who keeps his walker nearby. “I was only 58 years old. I wasn’t planning to retire or move. What was I going to do?”

He returned to Michigan and moved into transitional housing at Cass Community Social Services in Detroit, which has been running residential programs for the homeless for 15 years. Then late last summer, life became more complicated after Leenhouts put his hand on a television to steady himself as he stood and it fell over, breaking his leg.

“This changed his life at a profound level,” says Rev. Faith Fowler, executive director of Cass Community Social Services. “He’s not driving now, he’s not working now. He was a very hardworking pastor.”

Now, Leenhouts lives off a small amount of savings and Social Security that together pay him less than $17,000 a year — less than the federal poverty line in Michigan.

People such as Leenhouts — who have some income but not enough to afford a decent place to live — are who Fowler and her staff had in mind when they conceived of developing a 25-house community of tiny homes in Detroit’s North End, north of New Center and west of the Lodge freeway.

The full story is available at FordBetterWorld.org. Read it here.